Leadership is often as unforgiving as it is rewarding. Here’s our list of visionary and ambitious past presidents who have each done their bit, to bring the club to where it is today.

The 8th President of the club.

The 7th President of the club.

The 6th President of the club, Rtr. Aaqeel stayed committed to the club’s theme “Beyond Boundaries”, throughout. He pioneered the first Video Blog in district 3220, and oversaw the exponential growth of Conquer Colombo, which incidentally won club’s very first Rotary award for the “Rotaract project of the year”. The club also won several other awards including Club of the year and President of the year. 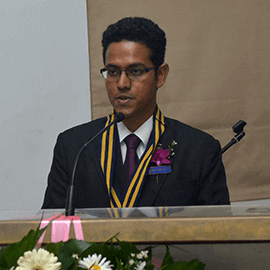 Rtr. Sandaru took over as the 5th president of the club and immediately launched the club website which has been crucial in showcasing the projects and achievements of the club. During his tenure FIA became a club project, from previously being a district project. Conquer Colombo also grew in scale and scope this year, winning gold award for the best club service project.

Rtr. Lahiru, took over the club as the 4th president of the club with the theme “Believe. Achieve. Inspire” and inspire, he did. As president, he oversaw the first ever sellout crowd at FIA, and initiated the club’s flagship project - Conquer Colombo. During his tenure the club won several awards including Club of the year and President of the year.

The 3rd president of RCALBS, was renowned for his inclusive style of leadership, creating the platform for members to grow. He is credited with winning the bid for Friends in Action, which has since remained with the club.

The 2nd president of RCALBS, Rtr Shafraz, provided the club stability in its early years and made his mark by winning the first Gold Award of the club for the e-magazine.

He was the charter president of the Rotaract Club of Achievers Lanka Business School – incidentally, the very first Rotaract Club by a CIMA institute. He initiated Christmas Smiles, the club’s longstanding community service project.